Thank you to everyone who nominated a colleague for a VidaNyx Award! We take great pride in having the backs of the professionals at CACs and we’re honored to celebrate everyone.

In the coming weeks, stay tuned for more stories from some of the worthy nominees. In the meantime, please celebrate our winners…

Champion for Children: This award celebrates policy and advocacy champions who tirelessly push for change on behalf of survivors. Anyone who advocates for children is eligible for this award.

Captain Sean Norman of the Wells Township Police Department in Brillant, OH, has been in law enforcement for many years, and also a huge supporter of A Caring Place for just as long – including volunteering his time and donating to the organization.

His work as an advocate for children doesn’t stop when his shift ends. He also coaches multiple girls softball teams as volunteer and is the local D.A.R.E. officer for schools.

But his largest effort comes through running an organization called The Wells Township Haunted House. This unique haunted house brings together teen volunteers and law enforcement to run what has been named the “top haunted attraction in Ohio by the Scare Factor, a national haunted attraction review organization.”

Capt Norman has run the haunted house for 15 years and the proceeds go back into designing and building the various rooms for the next season and providing scholarships to volunteers who are heading off to college or for high schoolers to attend various activities, such as band camps and athletic programs.

From his nomination: “Sean always says ‘I’ve created this space for the kids who may think they’re outsiders, or have no place they belong. They belong here and we always welcome them with open arms.'” 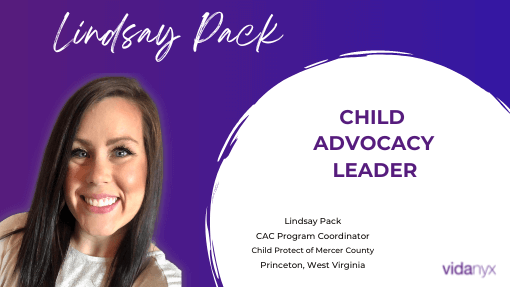 Child Advocacy Leader: This award acknowledges an employee of a child advocacy center who has shown leadership over the past year, going above and beyond their responsibilities.

Having recently gone through a Re-Accreditation Site visit, the reviewers specifically praised Lindsay for her facilitation skills and bringing the perspective of a mental health professional to the forefront of our case review meeting. Lindsay’s emphasis on mental health and healing has helped the team expand their focus from justice to include healing.

To grow in her career, Lindsay is also participating in an intensive six month long project through the Southern Regional CAC called Facilitative Leadership Learning Collaborative. Through this process Lindsay is learning new ways to engage the team as well as new processes to initiate to enable the team function at an even higher level.

One example of Lindsay’s dedication to supporting the team is that she recently visited a local law enforcement office to help an officer who was overwhelmed with his caseload and particularly a case that involved 10 children. Lindsay worked with the officer all day to report the cases to the DHHR Child Abuse Hotline, complete reports and paperwork, and set up interviews.

This summer, Lindsay is using the parking lot and sidewalk chalk as one of the “tools” in her kit to work with kids. They draw, doodle and write positive messages for other therapy clients to see.

From her nomination: “Lindsay is a mentor, teacher, supports, advocate, and friend to everyone. She’s an amazing team player who will jump in and conquer any task that needs to be accomplished.” 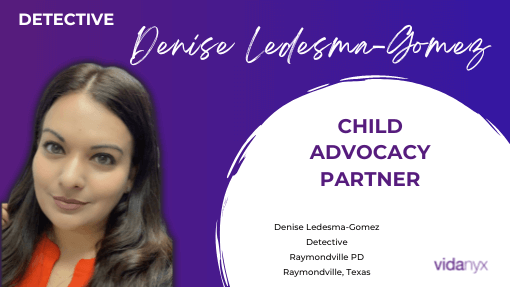 Child Advocacy Partner of the Year: This award specifically celebrates MDT members outside of the CAC who excel in advancing justice and healing.

Detective Denise Ledesma-Gomez is the lone Sex Crimes Detective (of minors and adults) at Raymondville, Texas Police Department in the Rio Grande Valley. Her caseload is extensive, actually similar to larger metropolitan Police Departments in the area.

Detective Ledesma-Gomez works selflessly and tirelessly as she is 100% committed to the mission of protecting children against physical and sexual abuse. Not only is she investigating an overwhelming abundance of sex crimes against children at the local, state and federal level but she also serves as the President of the Advisory Board of the Cameron County Children’s Advocacy Center.

Since 2017, Detective Ledesma-Gomez has been instrumental in the successful prosecution of crimes against children at the local, state and federal level. One case included a State of Texas Corrections Officer in Raymondville, Texas who was convicted in Federal Court in the Southern District of Texas (Brownsville, Texas)  for 132 months and remanded to the Federal Bureau of Prisons for Possession and Production of Child Pornography and Aggravated Sexual Assault of a 5-year-old Child.

In another recent case, also involving a State of Texas Corrections Officer in Raymondville, Texas,  Det. Ledesma-Gomez’ hard work and professional investigation led to the conviction and sentencing to 332 months and remanded to the custody of the Texas Department of Criminal Justice for sexually assaulting a 15-year-old minor female while he was about to enter-onto-duty with the United States Border Patrol as a Border Patrol Agent.

Det. Ledesma-Gomez is not only a Police Officer, child advocate and member of several different organizations for the betterment of women’s rights who are victims of family violence, she first and foremost a wife to an investigator and a mother of four children

From her nomination: “Detective Ledesma-Gomez is a humble consummate professional, loyal friend and loving wife as well as a fantastic mother to her kids. She is driven by her passion for justice for victims of crimes in her community of Raymondville, Texas.”

Shy Watters, of the Warren Washington CARE Center in Glen Falls, NY, has earned the knickname of “The Closer” because of her amazing success rate, especially with tough cases. It’s also worth noting that the CARE Center has a staff of two.

Her uncanny ability to get on a child’s level, to earn trust and build rapport, and to effectively communicate with children about difficult and tragic topics is unmatched.

In one recent case, a man had gained employment at a local day care facility and used that position to assault children under his care. Shy and one other FI interviewed “too many children to count” and obtained multiple disclosures of varying levels of abuse. The result was a guilty plea from the perpetrator.

In a case still pending, a 7- year-old girl repeatedly abused by her mother’s boyfriend initially was leery of new people. Shy’s interviewing led to disclosure of additional abuse that the suspect had committed against other children which the original victim observed. The victim says that after being interviewed by Shy and coming to the CARE Center she “…feel safes here and I have people who support me.” She is now 8-years-old and thriving with a great foster family.

From her nomination: “Shy is an absolutely amazing partner to our law enforcement, child protective and victim advocacy community. She has made the Warren Washington CARE Center a welcoming environment for everyone involved in the process of assisting victims, as well as for the children and families that we serve. Shy has never once hesitated to provide access to the CARE Center even at the most unusual hours. Shy is a true asset to the CARE Center community and is the epitome of advocacy for the children of our area.”

just 8% of those surveyed are satisfied or would recommend their digital evidence management practices The more everything is being recorded on video, the more our courts and legal investigations...
Read More

Searching for an eDiscovery System? We've created a comprehensive guide to making decisions on software purchases for digital evidence management. Digital evidence is a critical part of almost every...
Read More